A client from Jamestown recently returned to Audio Garage for some help with the stereo system on his amazing 2017 Harley-Davidson Street Glide CVO. We had previously upgraded the stereo on his Road Glide and now he needed help with this bike. Some of the speakers were cutting out and the system didn’t sound very good. After some repairs to the factory-installed Boom! Audio equipment, he still wasn’t impressed with the sound and returned to us once again for help.

We talked to this client about the music he listens to and what modifications and additions he would accept to his bike. After auditioning several speaker options, we set to work making this cool custom cruiser even more amazing.

All of our wiring was hidden from view.

The front speakers were upgraded with perfect-fitting Rockford coaxials.

Our upgrades have the client surrounded by great sound.

This bike audio system upgrade took place in two stages. First, we replaced the factory speakers in the fairing with a set of Rockford Fosgate TMS65 powersport speakers for better sound and dramatically increased power handling. Rockford designed these speakers to drop right into the factory locations without the need for any modifications to the bike.

To ensure that the sound system would play loudly without distorting, we added a set of lower speaker pods on either side of the engine. These pods allowed us to add a second set of Rockford TMS65 coaxial speakers to the bike to create an amazing front soundstage. These pods are designed to work with bikes that have the Twin-Cooled cylinder head design. Vents integrated into the rear of the pods channel air from the small radiators outward.

The bag lids were upgraded with better quality speakers.

After a bit of research we found speakers that would fit the holes in the bag lids.

The client sent the bike out for some customization, including the installation of a 30-inch front wheel and an air suspension system. When the work was done, he came back to us for some help with the new bag lid speakers that had been installed. The lids had been painted to match the bike but had a set of inexpensive, low-quality speakers in them. After some careful measurements and some research, we installed a set of Powerbass 8XPRO-8 8-inch midrange drivers to provide amazing efficiency. We added a set of Rockford PM2T-S Punch Marine tweeters to replace the horn-loaded units that had originally come with the lids. 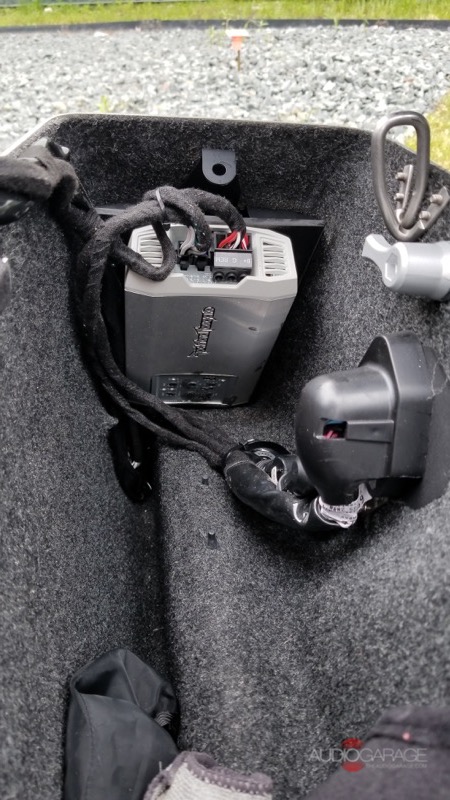 The amplifiers were neatly wired and securely mounted.

As you can see, all the wiring for the speakers and amplifiers is routed along the same paths as the factory audio system and is protected with automotive-grade cloth tape to prevent buzzes and rattles as the bike rolls down the interstate. 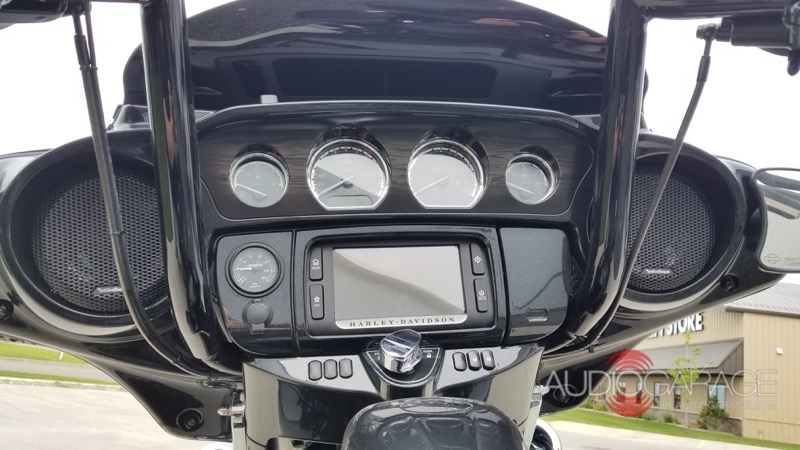 Thanks to our programmer we were able to retain the factory radio.

After using our Technoresearch programmer to flash the factory radio to remove as much of the equalization curve as possible, we connected a Rockford Fosgate DSR1 signal processor to convert the output into a signal that could be used by the amplifiers. The DSR1 also features an integrated eight-channel digital signal processor that we used to set crossovers for the rear speakers and tune the output of each driver in the system for amazing sound quality. Each pair of speakers on the bike has its own custom equalization curve to ensure that the system sounds great while cruising around town or when ripping down the highway.

Once everything was installed and tuned, we called the client to let him know he could come to pick up the bike. He was excited to hear the new sound system! Not only was it crystal clear, but it also played loudly without distorting – just the way he wanted. If you are interested in a custom audio system for your touring bike, drop by Audio Garage in Fargo and speak with a member of our team. We would be happy to design a solution that meets your needs and works with your budget. For more information or to schedule a consultation, call our store at 701-353-7266 or send us an e-mail using our online contact page.

The Audio Garage was a dream put into motion by Nick Paulson and his brother Zac in 2004. What started out as a hobby, working out of a small garage, … END_OF_DOCUMENT_TOKEN_TO_BE_REPLACED

The Audio Garage is a different kind of retailer. Lots of companies talk about putting the client first, but for us, … END_OF_DOCUMENT_TOKEN_TO_BE_REPLACED

For many people, trucks are a way of life. Here at the Audio Garage, we understand truck owners. Whether you use your … END_OF_DOCUMENT_TOKEN_TO_BE_REPLACED