You Are Here: The Audio Garage » Car Audio » Custom Stereo and Subwoofer for Fargo Jeep Wrangler 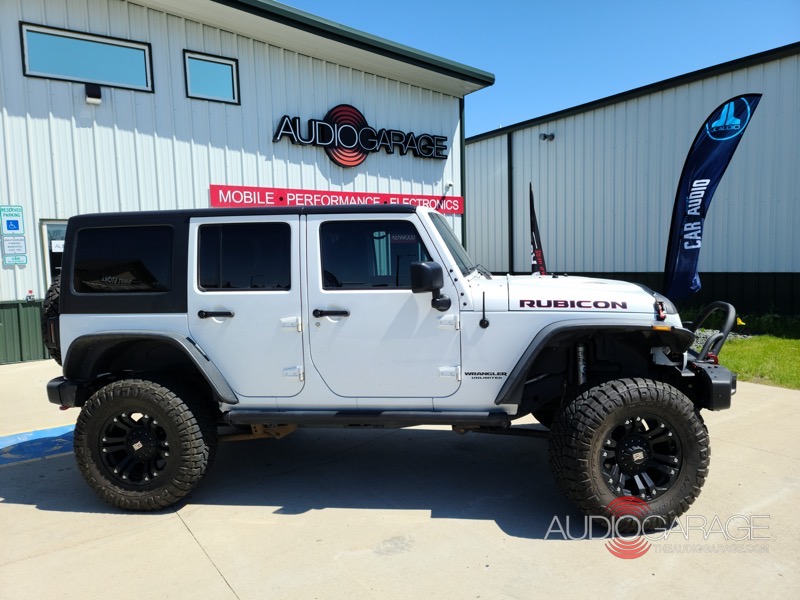 The owner of this 2014 Jeep Wrangler dropped into Audio Garage in Fargo to inquire about upgrading his sound system. He’d visited another local shop and was still uncertain about his plan to create a stereo that would play louder and deliver the bass performance he wanted. After talking to him about his music preferences and listening style, we put together a system design that would deliver on his goals and, quite frankly, blow his mind! He loved our attention to detail and gave us the go-ahead to start the upgrade.

The client can safely use his phone on his new radio thanks to Apple CarPlay.

The backup cameras high resolution is displayed on the new radio.

Our technicians were able to utilize the factory mount to secure the Kenwood camera.

The backup camera was mounted between the spokes of the spare tire wheel.

It has been said many times that an audio system is only as good as the source you start with. In this case, the client chose a Kenwood DNX997XR receiver as the heart of his audio system. As part of the eXcelon Reference series, this multimedia radio supports high-resolution WAV and FLAC audio file playback and uses premium components in the audio path to deliver amazing clarity.

We noticed that the factory backup camera on the Jeep wasn’t working reliably when we pulled the vehicle in. We offered to upgrade the camera and integrate it into the new Kenwood radio. With the client’s approval, we mounted one of the new Kenwood CMOS-720HD cameras on the existing bracket that fits in between the spokes of the spare tire on the back of the vehicle. This impressive camera features a 1280-by-720-pixel image sensor to provide amazing detail. It also uses dynamic range compression so that bright light sources like car headlights or the sun don’t blow out the image and mask items that are darker. Finally, the camera has a wide 180-by-103-degree field of vision to ensure that everything behind the vehicle can be seen on the screen of the Kenwood radio. Since the client occasionally tows a trailer, he liked the idea that he could bring up the camera image any time while driving using a dedicated button on the radio.

The last step in installing the radio was to add a SiriusXM satellite radio tuner module. The client loved the idea of being able to listen to a specific genre of music no matter where he is in the country. 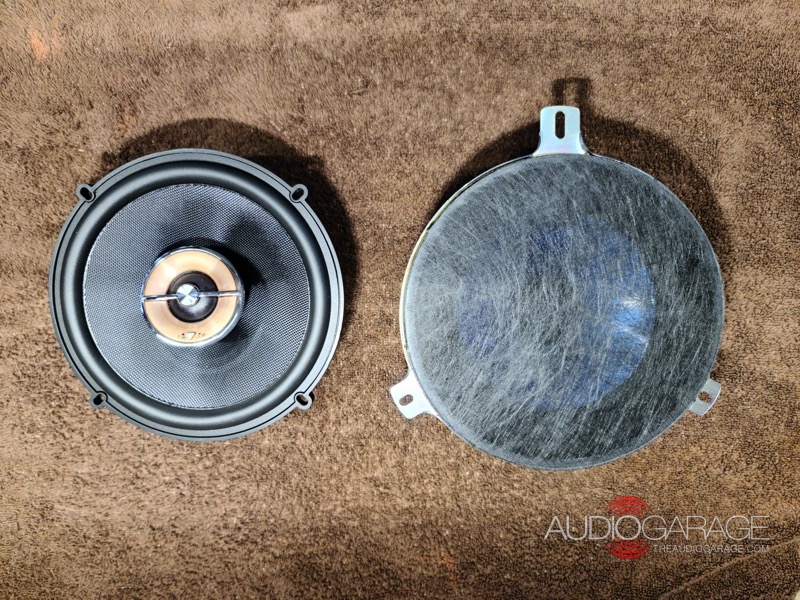 The factory speakers were replaced with Infinity Kappa drivers.

A great source unit is nothing if your audio system doesn’t have great speakers. We turned to the impressive Infinity Kappa series for the Jeep. We installed the 6.5-inch woofers from a set of Kappa 60csx components in the speaker pods in the bottom of the dash. We upgraded the pods with a layer of MESA sound deadening mat to reduce resonances and distortion. The tweeters from the set are mounted in the dash in place of the little midrange drivers. We matched the overhead speakers to the fronts using a set of Kappa 62ix 6.5-inch coaxial speakers. Once again, sound deadening in the soundbar improved their performance.

The large subwoofer enclosure houses a pair of Rockford subwoofers.

A back plate was added to the enclosure to conceal the amplifiers.

The client made it clear that he wanted some serious bass in his Jeep. He liked the idea of the small vehicle-specific enclosures that mount on the rear wheel wells, but we knew they wouldn’t produce the kind of output he wanted. We designed and fabricated a custom vented enclosure for a pair of Rockford Fosgate Power Series T1S-12 12-inch subwoofers. The 4-cubic-foot enclosure sits up tight behind the rear seat, and the woofers fire downward. The enclosure is secured to the vehicle using factory fastener locations.

The system is powered by a pair of Rockford Fosgate amplifiers. A T1500-1bdCP monoblock amp delivers up to 1,500 watts of power to the pair of subwoofers. A matching T1000-4ad delivers as much as 250 watts of power to the front and rear speakers. The amps are mounted on the rear of the enclosure and are concealed by a carpeted trim panel. Power is fed to the amps with 0-AWG MESA wiring to ensure reliable performance.

Once the gear was installed, the client returned to Audio Garage in Fargo to pick up his Jeep. He was thrilled with the way it looks and loved the clarity and output capabilities. If the stereo in your Jeep doesn’t put a smile on your face, drop by our shop or send us an e-mail. One of our Product Experts would be happy to help!

The Audio Garage was a dream put into motion by Nick Paulson and his brother Zac in 2004. What started out as a hobby, working out of a small garage, … END_OF_DOCUMENT_TOKEN_TO_BE_REPLACED

The Audio Garage is a different kind of retailer. Lots of companies talk about putting the client first, but for us, … END_OF_DOCUMENT_TOKEN_TO_BE_REPLACED

For many people, trucks are a way of life. Here at the Audio Garage, we understand truck owners. Whether you use your … END_OF_DOCUMENT_TOKEN_TO_BE_REPLACED