A client from here in Fargo contacted the team at Audio Garage to inquire about upgrading the stereo system in his 2017 Sanger 237 wakeboard boat. His e-mail mentioned that he wasn’t happy with the wakeboard towers on the boat, and he wanted something that would be both louder and clearer. After a brief discussion, he agreed to drop his boat off at the shop for an inspection once he took it out of the water at the end of the season. 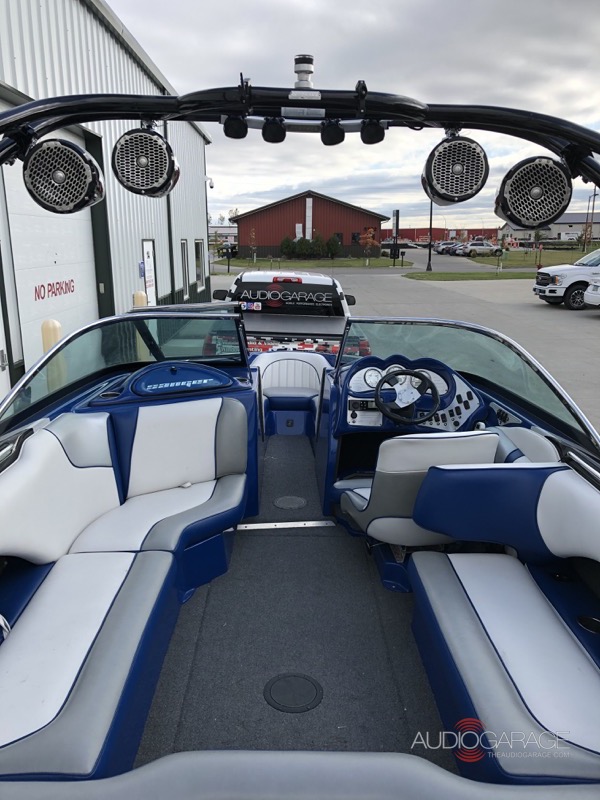 The new Rockford Fosgate tower speakers get the job done.

After inspecting the boat, we presented the client with several options to give him the kind of performance he wanted from the audio system. He decided that he wanted us to replace everything and take advantage of a sale we had going on at the time.

We started the installation by mounting two sets of Rockford Fosgate PM282W-B 8-inch wakeboard tower speakers on the tower. We ran all new wiring through the bar to the amplifier mounting location to ensure the client would get as much performance and reliability as possible from the upgrade.

The client chose to upgrade the coaxial speakers too.

The small size of the Rockford amps make them a perfect choice for this boat.

While running wires, we removed the four factory coaxial speakers and replaced them with Rockford PM2652 6.5-inch coaxial Punch Series drivers. We ran new wiring from these speakers to the amplifier location as well.

A pair of Power Series Rockford amps powers the audio system. A four-channel TM400X4ad amplifier provides each of the tower speakers with up to 100 watts. A five-channel TM1000X5ad powers the interior speakers with the same 100 watts. The client chose the five-channel amp because it was in stock and on sale. He isn’t using the subwoofer channel right now, but it is available should he want to upgrade later. 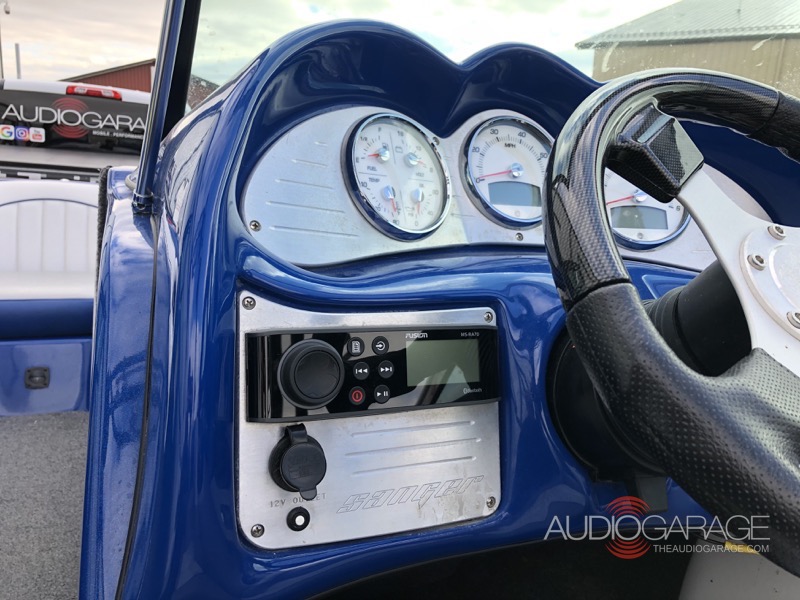 The failing radio was replaced with a new Fusion model.

During the boat inspection, we found that one of the channels on the original radio wasn’t working. We replaced the radio with a Fusion MS-RA70 digital media receiver. The radio fits perfectly in the factory panel to the left of the steering column.

With the new stereo equipment in this Sanger boat and the amplifier sensitivity controls calibrated to work with the Fusion radio, it was time for the client to return to Audio Garage in Fargo to pick up his boat. He was thrilled with the improvement and excited to get the boat out on the water next season.

If you are shopping for an upgrade for your marine entertainment system, drop by our store, give us a call or send our team an e-email using our contact page. We’d be happy to make your time on the water more entertaining!

The Audio Garage was a dream put into motion by Nick Paulson and his brother Zac in 2004. What started out as a hobby, working out of a small garage, … END_OF_DOCUMENT_TOKEN_TO_BE_REPLACED

The Audio Garage is a different kind of retailer. Lots of companies talk about putting the client first, but for us, … END_OF_DOCUMENT_TOKEN_TO_BE_REPLACED

For many people, trucks are a way of life. Here at the Audio Garage, we understand truck owners. Whether you use your … END_OF_DOCUMENT_TOKEN_TO_BE_REPLACED